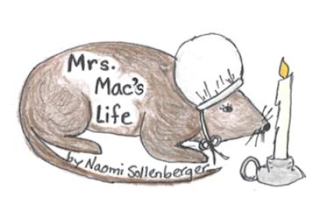 The life of a Dunkard woman could be very difficult during the winter months. Everyone looked forward to the coming of spring. In Germany they looked for the little hedgehogs to come out of the ground as a sign that spring would soon be com-ing. However, there were no hedgehogs in Amer-ica so the early farmers of Pennsylvania had to look for another animal to use as an indicator that spring was soon coming. The common groundhog seemed to be one of the few animals to come out of early hibernation. Farmers decided to use the groundhog as a sign that spring was only a few weeks away. In Europe the forty days after Christmas had another name called Candlemas Day that was used as a religious holiday by many churches. It is considered to be the halfway point between winter and spring. To our Dunkard woman it was a day to check out how many pumpkins, squash, dried beans, nuts, dried meats, and other food items were left that were put away in the fall. There were no stores or trading posts close by so all staples had to be brought in by pack horse or in small Conestoga wagons especially built to travel our rough, narrow roads. It was the woman's job to manage the household and make sure that there was enough food. In the summer months she spent much time working in the small gar-den plots that were planted and often protected by fences made of sticks. Much of the food that was grown in these plots was dried on cloths spread out in the sun. The woman would also make candles and soap during the summer months. Sometimes she would find a beehive that could supply honey and bees wax. The bees wax had many useful properties besides be-ing used to make candles. Herbs were grown for seasoning food and used as medicine. A few Dunkards did make friends with the Indians. These Indians shared their knowledge of plants with them. She often had to do without sugar, flour, cornmeal, salt, and tea by this time of the year. Many women learned to substitute native herbs and grind nuts for some of these sup-plies. The men would supply the family with meat from deer, bear, wild turkeys, squirrel, rab-bits, and fish. The children would often help with some of the daily chores such as gathering firewood and bringing in water. It was hard work to be a woman in the early years but singing hymns as they worked and using the scriptures as a guide for living helped them to get them through the tough times.
Slowly life became easier for the first Dunkard woman as the roads became better and more people came into the area starting businesses that helped supply household items. If their
husband was a deacon, then the woman had another responsibility. She would be asked to visit members of the congregation, help when there was sickness, and help with love feast preparations.
Mrs. Mac says you should count your blessings instead of candles and appreciate the life you have today.