Welcome to Andrew and Courtney Duffey 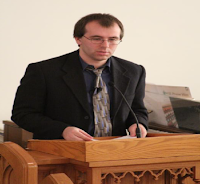 Andrew Duffey has accepted the pastoral position here at New Enterprise Church of the Brethren. We welcome them to our church family.
While growing up as a PK (pastor's kid), Andy admits he never seriously considered pastoral ministry until he was 15. He was in youth worship at Annual Conference when he was overcome by the Spirit of God, overwhelmed by an all-new sense of being forgiven, combined with a feeling of mission that was undeniable. He knew God had set him apart for pastoral ministry in that moment. He began studying, praying more earnestly, and becoming more active in leadership.

Andy was born in Baltimore, MD, on July 17, 1986, to Scott and Rebecca Duffey. His father began pastoral ministry when leaving seminary when he was a young adult. When Andy was born, his dad was the pastor at the Long Green Valley Church of the Brethren (MD). At the age of three, Andy and his family moved to the Greensburg Church of the Brethren (PA). From there they spent 16 years at the Westminster Church of the Brethren (MD). In 2007, while Andy was a student at Bridge-water, the family went to the Staunton Church of the Brethren (VA).
Andy majored in history with a minor in philosophy and religion at Bridgewater. He graduated from Bridgewater in May 2009 and from Bethany Seminary in May 2012.
When asked about their first date, Andy stated that Courtney and he went to see a movie one weekend when he came home during his first year at Bethany. They were very close friends for about 2.5 years before they started dating in 2009. They dated another 2.5 years before getting engaged the week after he graduated from seminary. They were married on January 5, 2013, at the Bridgewater Church of the Brethren, Courtney's home church. They went to Disney World for their honeymoon.
Andy states that he has learned a LOT about what it means to be a Christian, a leader, and a pastor from his father, and he still looks up to his dad and seeks help from him. He also remembers his mother's sense of humor and passion for ministry in her own way which taught him about the importance of every person's unique ministry.

Getting to know Pastor Andy…

Hobbies: enjoys movies, reading, and studying
science fiction and fantasy
Interests: playing drums, music of all kinds
Favorite color: green
Favorite hymn: many, but especially "Praise to
the Lord, the Almighty"
Favorite dessert: anything with coconut
Favorite food: spaghetti
Favorite book to read: Bible…anything by
J.R.R. Tolkien, like "The Lord of the Rings"
Favorite scripture text: Romans 8:31-39
Favorite N.T. Bible passage: the Gospel of John
is awesome
Favorite O.T. Bible passage: the epic of David
in1 and 2 Samuel