New Life
New Creation
New Community
New Church
He is risen! The tomb is empty! Death is defeated! We are free from the power of sin to live new lives for God’s kingdom! Spring is here!
So… Now what? We hear the words of resurrection, but much like the
disciples, it’s hard to believe; especially when the bitter colds of winter re-main. Especially when the sin of the world still weighs so hard on our hearts and minds. Especially when the suffering of death remains and is keenly felt. As nice as new life sounds, and as much as we WANT to believe that spring is here, the obvious evidence to the contrary can be overwhelming. 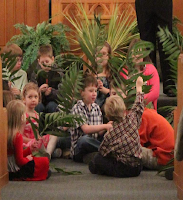 But perhaps this comes from our desire for Easter to be the end of the story rather than the beginning. Certainly Easter is AN end, but it is not THE end. Just as baptism signifies our rebirth into the world as followers of Christ, Easter is the new birth of creation into a new destiny. Life no longer needs to end in death and meaninglessness, but now life leads to God and endless meaning. The resurrection is the birth of hope into the world. After it we can say with confidence that no matter how dark and frightening the world gets, no matter how much suffering sin builds up, and no matter how long snow and ice keep the green earth from arising, death and winter have lost their sting! This is the beginning of a new and greater story! We are part of a new creation! We are a new church on a new adventure to seek God’s kingdom of love here and everywhere.
He is risen!
He is risen indeed!

7  --  Pastor Andy will be at New Parish Retreat